"Whateva da 'umies are guardin' we must get for ourselves"

After landfall and the formation of a great Speed Waagh, Zogger Skullcrusha knew there was some good fighting and loot to be had on this planet. Having proved himself to Da Big Mek Boss, having won all the big races out on the deserts. He proved his buggies were the fastest, loudest and had the most Dakka. Da Big Mek Boss decided he had bigger plans for Zogger. Salvage and fuel was becoming slim pickings and Da Boss was kunnin, and knew there had to be some good loot beyond the force fields. In those big cities where all the 'Umies live. Having seen activity around a particular area, Da Big Mek Boss came to the conclusion that some serious Krumpin' needed to be had. Zogger having beat some boyz into submission to follow his cause, getting them all riled up for a good fight. They head off into the desert on their buggies to fulfill this big mission. Of course, getting into some good fights in the process.
Bring me your Universes ultimate cup of coffee...! BLACK... You have five.. Earth.. Minutes. Make it perfect!
Top 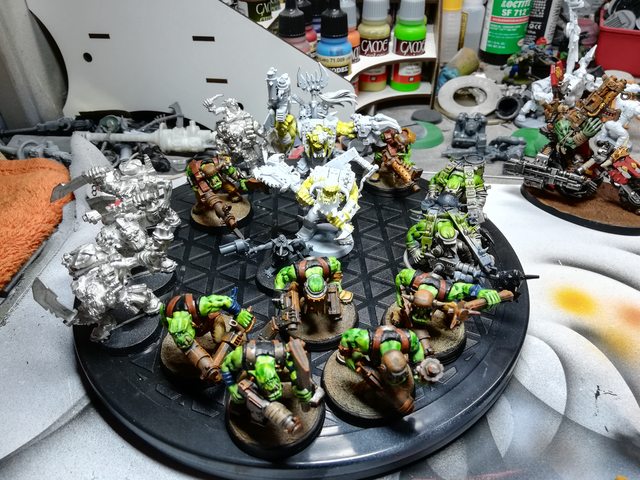 the team thus far
Bring me your Universes ultimate cup of coffee...! BLACK... You have five.. Earth.. Minutes. Make it perfect!
Top

The first scouting encounter of the generators proved to be quite fortuitous for the Gitz. Hopping in their buggies, spitting flames and vile smoke, shooting their sluggas in the air as they traveled, happened upon a small force of Death Guard. The only smell more vile than the Gitz themselves. Having surprised the small force, fighting quickly ensued. The Gitz quickly jumping from their buggies, excited to sink their weapons into some already putrid, rotting flesh. They quickly forgot why they even came to this area, the thirst for battle more important than any mission. Zarksnot make quick work of their leader. Lighting him aflame with his Skorcha. Howling as the hideous form burned.

The battle seemed to go on for hours, but in that few quick minutes, almost both forces lie on the ground knocked out of action, but Gitzog and a few others, with the intel they came to gather. Elated with the glorious battle that ensued. Throwing the out of action Gitz into the back of the buggies, they speed off to other possible locations for a good fight, and maybe even some more of this strange intel about the force fields.
Bring me your Universes ultimate cup of coffee...! BLACK... You have five.. Earth.. Minutes. Make it perfect!
Top
Post Reply
3 posts • Page 1 of 1